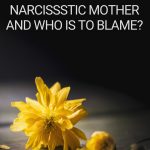 You would think someone would have definitive answers for this condition since it affects and destroys so many lives. What causes a narcissistic mother to behave so strangely toward her own children, and who or what is to blame for this backward behavior?

The problem with most narcissists is they will seldom seek help or benefit from any help they get because they are incapable of facing the truth about themselves.

This makes it impossible to clinically diagnose and get treatment. You can’t help someone who doesn’t want to be helped or can’t see that they are part of the problem. Most people have what’s called a healthy level of narcissism—things like putting your needs first and taking care of yourself before taking care of everyone else.

Narcissists never put someone else’s needs before theirs, and they can’t regulate their own emotions.

They see “taking care of yourself” as disrespectful, ungrateful, and selfish and expect you to be focused on their needs at all times.

Everyone likes compliments and sharing their accomplishments. Narcissists live and survive off of other people’s compliments and gratification like a drug. They need constant emotional support from outside sources but don’t have the ability to offer genuine support in return.

They don’t have the ability to self-soothe, so they rely on other people to make them feel better about themselves. But, instead of giving you hypothetical theories about what may have caused my mother to become a narcissist, I’ll tell you my story, and you can make your own assumptions.

Before I tell you my story, you should know this is only one side of the spectrum. I know many daughters whose narcissistic mothers had horribly abusive childhoods you wouldn’t wish on anyone. Of course, it’s possible they developed narcissistic behaviors out of the sheer need to survive.

What causes a narcissistic mother to develop narcissism?

One thing that always stands out is it’s developed in childhood. You don’t just become a narcissist as an adult.

Many people have narcissistic tendencies but not full-on narcissism, so it’s hard to tell the difference at first, especially if you’re in an abusive relationship. It’s easy to call someone a narcissist, but when you have first-hand experience with a real live narcissist, you won’t believe what you see at first.

You won’t even know what’s happened to you until it’s too late.

The damage will already be done.

I assume that’s how you got here.

You’re trying to fix the damage now because you realize what’s actually happening to you.

What causes a narcissistic mother is always up for debate.

However, you know your mother better than anyone else on earth, so maybe she had an abusive childhood, or maybe she was raised like my mother.

My mother was given the best of everything from the day she was born until even now. She was the 6th child after five miscarriages. After five failed attempts, over the course of a decade, finally, my mother was born. She was wanted and loved more than anything in the world.

They were desperate to conceive and loved their firstborn baby more than anything in the world. All her needs were met, including financially, for the rest of her life after they died. My mother has never wanted for anything, and still, she is the most miserable human being I’ve ever seen.

A child who’s never told ‘no’ can turn into a narcissist.

A child that’s never had to struggle and make their own way in life would probably be a little out of touch, don’t you think?

These are all speculations, but it does make you wonder if extremes of too little or too much are what creates a narcissist. The other option is she was just born this way.

By the time I was a young teen, I remember how strange it was how my mother seemed to have complete control of her parents and only sister. They’re just as much a victim of all this as I am, so I find it hard to blame them.

In my early twenties, I remember thinking about how I never learned kindness from my mother. She wasn’t a kind woman, and in many ways, I used to mimic her behavior because I didn’t know any better. I hated that about myself so much, and I didn’t know how or what behavior was appropriate, so I would completely shut down.

I spent my thirties reparenting myself because I wasn’t parented as a child. I was viciously and relentlessly attacked by this woman every single day of my childhood.

What causes a narcissistic mother’s behavior and lack of self-awareness?

Since we can’t understand how it happened, the only thing we can do is deal with the aftermath.

The first step is to get yourself a support system outside the reach of the narcissist.

Surprisingly social media is a resource for finding support groups. Even Tiktok is full of information and real people.

If you’re the scapegoat like me, then it’s a very lonely and isolated world. Use the keywords narcissistic mother or emotionally unavailable mothers, and you realize you’re not alone anymore and there’s strength in numbers.

You have to know this isn’t your fault, and the blame you’ve been carrying your whole life doesn’t belong to you and isn’t yours to carry.

You are not to blame for the way your mother treats you.

It’s not your responsibility to fix her, no matter what she says or how much she tries to convince you otherwise. If you’re here reading this, then you are not the crazy one. You are not the narcissist. But, how do I know for sure?

Because a narcissist wouldn’t seek help, narcissists don’t internalize emotions. They’re not capable of taking responsibility for their actions. If they ever do apologize, it’s empty and means nothing.

Are you ever sorry?

Do you feel bad about things you’ve done?

When you apologize, do you truly mean it?

If you can answer yes to those questions, then you are not the narcissist.

What causes a narcissistic mother doesn’t matter. The damage she’s done will last a lifetime, if not generations. When you’ve been raised by a narcissist, you were raised by a very negative personality disorder, and it can change your perception of the world.

I thought it was normal to be negative all the time.

Usually, the voice is of the person who raised you, and you can bet a child raised by a narcissist has a very nasty inner voice. You can’t fix a narcissistic mother or get even for a lifetime of abuse, but you can outsmart them by undoing the damage and living a happy and fulfilled life.

She will absolutely hate you for being happy because it’s something she will never be able to do. She will most likely never be happy for as long as she lives, but that doesn’t have to happen to you because you are not your mother.