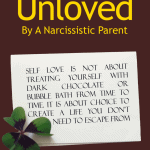 The narcissistic mother has a way of making her children feel owned instead of loved, and she never failed to remind us our fate was in her hands.

She has complete control, and everyone in the narcissistic family has no idea it’s even happening.

As adults, nothing really changes.

You can’t explain what it’s like to know someone your entire life who never corrects their bad behaviors.

Who never learns how to be a better person.

A person who is incapable of seeing their own flaws, but points yours out daily.

Narcissistic mothers don’t have children for the same reasons normal mothers do.

They don’t have children because they want to see their cute little fingers and toes.

They don’t have children to watch them grow and play to remind them of the good things in life.

The narcissistic mother has children for a very different purpose.

They know a child will love them unconditionally, and they will have complete control over their lives.

These children are mostly born to be slaves to the narcissistic parent.

She not only has no business having children but soon after she does, she realizes how much work it is.

A few years into the gloriousness of being a mother… she’s done.

From a very young age, I felt her resentment towards me.

It wasn’t until I became a mother myself I realized how strange it was.

I must have been horrible; what else could it be?

Another thing to point out is mothers like this are obsessively concerned about what society thinks of them.

Their reputation and outside appearance is the only thing that matters.

They could never choose not to have children, what would people say?

After I went no contact, she sent me a “little box of memories” filled with all the cards she got from people for having a baby.

Everything was always about her.

Material things mean nothing to me.

A bunch of cards over forty years old signed by dead people I never knew is not the way to win me over.

I’m sure she felt like she was making a real effort, but after forty plus years, she doesn’t know me at all.

The narcissistic mother is hard to spot because, in public, they act as other parents do.

Not just in public either, as soon as my father walked into the room, she became a completely different person.

We would spend all day with the nastiest mother on the face of the earth, and as soon as he walked in, she had an instant personality change.

This is how a covert narcissist behaves, they can be very subtle when they need to be, very clever, and I know since I couldn’t do anything but silently watch and observe.

How do you defend yourself against that?

The best time of day was when Dad came home, and then we could all breathe for awhile.

But eventually, by the time I was fourteen, she succeeded in turning him against me too.

Suddenly out of nowhere, he was fuming at me because I was wasting money using too many razors for shaving.

He looked a little stunned, turn around, and walked away.

This is just one of many examples, but she would get him all worked up in a tither over nothing for no other reason than to punish me.

It’s how the narcissistic mother gets her supply.

This is why they have children; they need a resource for a constant supply.

She worked overtime, looking for things to punish me for because I was not a bad child; I was very obedient trying to please my mother.

I was no shrinking violet either, and by the time I was a young adult, it was full-on war between her and me.

Don’t forget I was raised by a narcissist, and I can go all day, all week, and survived year after year with no quit.

And I did it completely isolated and alone.

The narcissistic mother will completely isolate her children.

I was never allowed to socialize or do anything without my mother right there unless it was a church function.

Church and religion can be highly important to a narcissistic parent.

It demands obedience and what they believe is the only way to heaven as they preach at you their weaponized God.

I joined 4-H; my mother decided to be the 4-H leader of my group.

I got involved with gymnastics and loved it.

She decided she didn’t like the coach, and I never did gymnastics again.

She wanted me to play the piano and was going to teach me herself.

When that didn’t work out, she proceeded to find me the meanest teacher in town.

I didn’t respond well to this woman, and eventually, she told my daft mother that if I wasn’t going to practice, there was no sense in paying for piano lessons.

I can go on with examples, but basically, she did everything she could to sabotage what I enjoyed, and this was just her usual nitpicking she did every day.

If there is any joy or happiness in your life, a narcissist will do everything to destroy it, it’s what they do.

You don’t get love or acceptance from the narcissistic mother.

These are the kinds of memories flashes I have from my childhood.

I was picked on and bullied by her every single day of my entire existence for no other reason than her insatiable need to feel superior.

Lowering someone else and making them feel miserable is the only way a narcissist can get supply.

And they need a constant supply.

They don’t have the ability to build themselves up from within, so narcissists are completely dependent on outside sources to help them feel better.

There is no better way to feed this need than having a child.

You’re not a person to a narcissistic mother; she considers her children as an extension of herself.

You’re a part of her she owns, and if you’re the scapegoat, you’re treated like an unwanted animal.

As you grow older and develop your independence, this enrages a narcissistic parent.

Here’s a list of things you don’t forget about this kind of parent:

They want total control or nothing, so when you start voicing your own thoughts, opinions, or emotions, they see this as a threat to their control.

They can also be extremely jealous of their daughters, and when you’re dealing with jealousy, it’s one of the most wicked of the seven deadly sins.

Why does a narcissistic mother treat her children differently?

It’s important to understand that a narcissist can’t give or receive love.

Narcissism is on a broad spectrum, but their ability to give and receive love is very limited compared to a normal person.

One of their children is designated as ‘the problem’ in the family.

There has to be someone to blame because a narcissist will never take responsibility or admit to any wrongdoing.

We are called the family scapegoats.

I was chosen because I challenged her behavior and have since I was able to form thoughts.

We are the truthtellers, and the truth is a narcissist’s worst nightmare.

Scapegoats are by nature non-conformist, and not easily controlled.

This is my God-given personality, it’s literally the essence of who I am, and she hated me for that.

If your mother is a narcissist, she will despise you for your moral character and your ability to love unconditionally.

A narcissistic mother doesn’t attack her weakest child, there’s no need to.

When she realized I couldn’t be easily controlled, she designated me as the family scapegoat.

I would spend my entire life believing I was the problem, and something must be very wrong with me to be so unlovable.

I was raised to believe I was bad, and everyone else was somehow better than me.

I had zero self-esteem and was taught not to trust my own emotions and feelings.

To this day, everything I do in her eyes is bad, wrong, and shameful.

That’s not a mother.

On top of all these things, I also grew up without a mother’s love.

The only time I got any resemblance of love or affection from her was in public, in front of an audience so she could prove to perfect strangers; she was a good mother.

How do you defend yourself against that?

How do you explain it to people?

I was unable to defend myself; I wasn’t even allowed.

I grew up never feeling heard, and I was never given emotional support.

She convinced every single family member I was the problem, and I was the only one to blame.

I wish the problem was me so I could fix it.

If it’s not me, then one thing is for sure…

All hope is lost.

I can only save myself.

If you were raised this way, it’s possible you’ve never put it into words, and that feeling in your gut?

You were trained not to trust yourself; you were told you’re overly emotional, sensitive, and dramatic.

A good mother teaches her children how to think for themselves and how to defend themselves.

The narcissistic mother is a coward that can’t be reached because she’s too afraid to be human.

She’ll stay as she is and as she’s always been until she dies.
There is no way to help her, and as of today, there’s no way to fix a narcissist.
You can change, you can evolve, and you can overcome because you’re not the one who’s broken.
Don’t forget that.
You might have some weird behaviors from being raised by a narcissist, but there’s a solution for that, so read it next.

I tried life coaching, and it’s been a life-changing encounter.

I needed someone to listen to me and help me understand myself better.

It was the most liberating and grounding experience of my life, so I decided to become a certified life coach.

If you’re interested, get more information about how coaching works at proofoflifecoaching.com.

When you’re dealing with narcissistic abuse, sometimes you need help. If you have more severe symptoms like debilitating depression, PTSD, or C-PTSD, you can connect with a professional therapist online.

It called Online-Therapy (20% off affiliate link).

You don’t have to be face-to-face or meet them in an office.
They’re available and on-call for you Monday-Friday, so there’s no waiting three weeks for an appointment.
It’s affordable, and you pay much less than seeing a therapist in person.